Dragon Age: Inquisition has a lot riding on it, no doubt of that. As the third entry in the Dragon Age saga, continuing the story of the fan favorite Dragon Age: Origins and the underrated follow up Dragon Age 2: The Sequel (no that is not the actual title come on guys), Inquisition has a solid foundation to build on. The question is, can it live up to the expectations of fans of the series?

That’s a silly question. Of course it can. Great blue heron poker tournaments 2020.

Here’s a better one: can it live up to my expectations? Because frankly BioWare has burned me once already with third entries in a saga, and I went into this half expecting it to fall short of the hype. Or I would have, had I paid any attention to the hype. See I decided to do this new thing where I pretend a game doesn’t exist until I’ve installed it. Hype bad. Games good. I knew I needed to play this one, having been hooked by its predecessor. Beyond that, I tried to know as little as possible. A few details about the engine notwithstanding.

Thus far, I am not disappointed. In fact, I am thrilled. I’d even go so far as to say this is the best BioWare game I’ve yet played.

I’ve finished it twice. I think I started about five different characters.

So let’s cover the stuff I can handle without spoiling stuff for people, yeah?

I started my first game as a mage, because a) I always start as a mage because I desperately want mages to be fun and awesome and b) mages had the most improving to do from the prior titles and I wanted to know immediately if they’d succeeded.

They had. Mages are awesome. Status conditions, massive area attacks, ability combos, and the ability to grab the amazing fade step power make mages more fun than ever, and more mobile. You’ll probably want to sink enough points into the Spirit tree to get some threat reduction though.

One disappointment though; the ability bar isn’t long enough. You can only fit eight active abilities on it, which is a bit of a downer for me – you get one free one in the process of gameplay (a “focus” power), which leaves seven to choose that you’ll be using regularly. Probably most of you will be smart enough to keep that limit in mind and plan your leveling better than I did. Either plan around your passives, or expect to rotate disused powers off the bar.

Well, okay, “eight slots” makes it sound worse than it is. The healing potion slot is set to 9 and can’t be changed, 0 and + are for potions, tonics, or grenades of your choice, and = is set to call your mount. It’s just that no custom buttons other than 1-8 are set for your class powers.

They say Inquisition was designed with a PC in mind, but not being able to use shift or other keys to hotbar more powers will probably bother at least a few people other than me. This flaw aside, gameplay feels awe inspiring. The threats feel appropriately looming and deadly, the effects are beautiful, the facial animations are emotive, this is pretty much Bioware at its best.

Each area of the game feels MASSIVE; Skyhold, your headquarters after the first act is over, is so large that it has its own fast travel points. And that’s just YOUR FORTRESS.

More important perhaps, they feel big, important, worth exploring. And the areas are mostly ‘unleveled’ – you will run into threats early game that you’ll have to come back and address later with more power or different perks. And there are just so many things to do, characters to befriend, villains to foil, resources to collect…

Despite this, once I get past the main menu, load times are pretty okay.

There are at least three kinds of progress to be aware of; character leveling is the first (and all that entails, though stat adjustments seem to be outside your area of choice except the bonuses gained from gear). There are three specializations for each class, and two weapon styles each for the rogue and the warrior. Each has a fair amount of depth and build complexity and minmaxers will have a field day with the party management and the equipment/crafting systems. You’ll be fiddling a lot, at least if you’re like me.

Then there’s the level of the Inquisition, measured in ‘influence.’ Each level gained by the inquisition gives you a new perk in one of four areas (Endurance, Secrets, Connections, or Inquisition (concerned with the infrastructure and efficiency of the group)).

As near as I can tell, the category you have the most perks in determines your reputation throughout the game and during the epilogue… though this basically boils down to responses from your ambassador when asked “what do people think of us?” The perks themselves are generally pretty neat, unlocking things like increased XP for particular actions, new dialog options, the occasional operation at the war table, and so on.

Inquisition is the first game I can remember that actually pulls off the “head of a big organization with its own army who still needs to handle the important stuff personally” balance fairly well. You get Operations at the war table, your advisers will occasionally ask your input on matters of state, the works. And every so often, you sit in judgement over somebody who probably pissed you off pretty bad on one of your field missions. The Inquisitor has a lot of tools to work with, from executions to exiles to conscripting former foes into your service (willingly or otherwise). And mostly the judgements feel pretty … kingly? Is that the word? 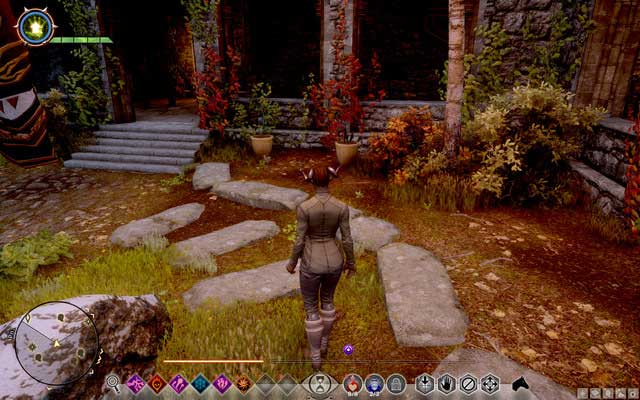 The point is, it’s that thing Fable III promised me and utterly failed to deliver, done right. Nice job.

Missions are varied well enough, a nice mix of ‘kill all the things’, make big Bioware choices, engage in courtly intrigues (one of the main story missions involves a masquerade at a palace and trying to decide how to address the threat of an assassination), closing the Rifts, and so on. You’ll fight demons, bandits, and… well okay mostly those two things. Also a lot of apostate mages and renegade templars and twisted abominations made from wicked experiments, darkspawn, and at a certain point — should you go looking for them — dragons.

There are a few issues on my system that I mostly blame on aging hardware. But on the whole it runs fairly well despite my GTX 4-whatever – it comes off as better optimized than some other recent titles. A few settings had to be dialed back and there’s occasional stuttering, oddly NOT during most combats (which tend to be smoother than the cutscenes, go figure). Your mileage may vary.

Multiplayer … exists. There’s not much I can say about it, honestly. MP was a selling point for Mass Effect 3 and after awhile the only thing that kept me launching the game. Here it feels more like an afterthought. If you like it, more power to you. It just doesn’t appeal to me here.

This game is a must play. Single player is not dead. Grab it, mine it for ideas, play it a couple of times with different classes and races, be prepared to sink a LOT of time. Dragon Age: Inquisition is a winner.